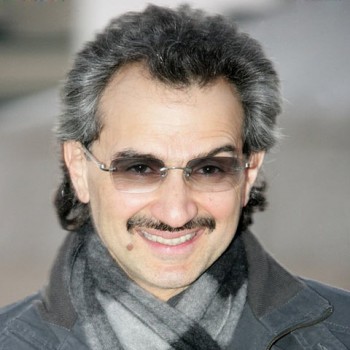 Saudi's Crown Prince Al-Waleed bin Talal has been arrested by anti corruption.Prince Alwaleed Bin Talal, one of the world's richest men and a well-known investor was one of the 11 princes detained in a supposed anti-corruption sweep over the weekend in Saudi Arabia. Alwaleed has not yet been charged, but is suspected of money laundering, according to the Wall Street Journal. His arrest may be less about corruption and more about Crown Prince Mohammad Bin Salman — the 32-year-old heir apparent to the throne — consolidating power.

Saudi royal family Prince Alwaleed Bin Talal Alsaud is an investor, businessman, and philanthropist. According to Forbes, his current estimated net worth is $18 billion. However, many people believe that he has a higher net worth than the Forbes estimate. In fact, in 2013, he rigorously sued Forbes for undervaluing his Fortune. Again, according to Forbes, his net worth has declined from around $30 billion to $18 billion. At present, he enjoys several lucrative investments and ownerships. Notably, he is the founder, CEO and 95 percent owner of the Kingdom Holding Company, a Saudi conglomerate holding company based in Riyadh. The company currently enjoys a market capitalization of around $40.62 billion. If you don't know, the company is currently building the future world tallest building called, Jeddah Tower, which has an estimated cost of $20 billion.

Al-Waleed Bin Talal bin Abdulaziz al Saud is regarded as the Warren Buffett of Saudi. Nevertheless, the Saudi Prince is one of the influential people in the world, Times magazine. Furthermore, he is an awarding philanthropist and worldly respected figure. Likewise, he has helped many high-profile personas to big ventures during their hard times.

Born on March 7, 1955, Al-Waleed Bin Talal is a son of Prince Talal and Mona Al Solh, daughter of Lebanon's first prime minister Raid Al Solh. Likewise, he is a grandson of Ibn Saud, the founder of Saudi Arabia. BinTalal derived his inspiration from his father. His father, Prince Talal, was Saudi Arabia's finance minister in the early 1960's. Likewise, his father is someone who had to go into exile for advocating political reform in the country. The Prince completed his master degree with honors in social science from Syracuse University in 1985. After his graduation from Menlo College, the Prince allegedly received $30,000 as a gift and $300,000 as a loan from his father. He also regularly received $15000 as a grandson of Ibn Saud. According to Al-Waleed, he is a self-made billionaire, but critics tend to differ. In 1991, he made a huge investment in Citicorp when he was just 36 years old. The investment not only helped the organization to rise from the crisis it was then facing but also ultimately made him one of the world-renowned billionaires. Waleed starting his business career in the year 1997 after receiving a business administration degree from Menlo College in California.

Prince Waleed Bin Talal has been married thrice till date. Most precisely, he first married his cousin, Dalal bint Saud, a daughter of King Saud. He has two children with Dalal. Later, he separated from his third wife in 2014. They reportedly ended their marriage via an amicable divorce.