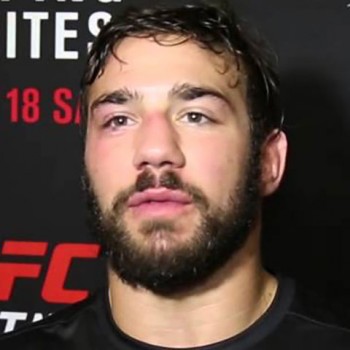 Facts of Jimmie Rivera’s net worth

Jimmie Ernesto Rivera is an American mixed martial artist with an estimated net worth of $500,000. Rivera has earned around $125,500 in salary in his shining career. Ernesto is currently fighting in the Bantamweight division in UFC. One of the emerging UFC talents, Rivera he has total 20 wins out of 21 professional matches.

Born on 1989, June 29, Jimmie, a Puerto Rican descent, started to fight at the age of 18. Trained under team Tiger Schulmann MMA, Rivera started his professional debut in 2007. After gaining a terrific win record of 7-0 in just two years of amateur career, he moved to professional mixed martial arts.

His first big day came when he fought against Willie Gates in the Bellator Fighting Championships on April 10, 2009. Jimmie won the match via submission. He then gained his second success against Nick Garcia via unanimous decision at Bellator 11 in June 2009. Moving forward, he became the King of the Cage champion after defeating Abel Cullum on September 17, 2010. Rivera defeated Cullum via split decision after five rounds and won the KOTC Flyweight title. Later in 2011, he successfully defended his title against Jared Papazian via unanimous decision. Soon after, Rivera tasted his first defeat against Dennis Bermudez at The Ultimate Fighter: Team Bisping vs. Team Miller. Returning to the Ring of Combat in 2012, Jimmie won the bantamweight title Justin Hickey, and also defended it later against Anthony Leone. In 2012 and 2013, Jimmie enjoyed successful stints at "Bellator" and "World Series of Fighting." Rivera had his greatest winning fight against Sidemar Honorio at WSOF 5. The brutal match became the anticipated match for the audience when both of the players showcased their excellent moves. Jimmie, who was seriously hurt in the first and second round, gained control of the match in the third round and defeated Honorio.

Jimmie Rivera made prominent debut in UFC against Marcus Brimage at UFC Fight Night 72 in July 2015. Rivera easily won the match in the very first round via TKO. The journey to UFC has been successful for Rivera as he still stands undefeated at UFC. So far, he has defeated fighters such as Pedro Munhoz, Luri Alcantara, and Urijah Faber. He gained his first Fight of the Night bonus award after defeating luri Alcantara at UFC on Fox 18 on January 30, 2016. Jimmie is facing Bryan Caraway on January 15, 2017, at UFC Fight Night 103.