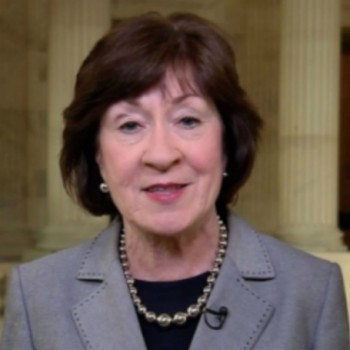 Facts of Susan Collins Net Worth

Who is Susan Collins?

Susan M. Collins is the Republican party member & the senior Senator from Maine. First elected on November 5, 1996, Senator Collins has served for 20 years in the State of Maine.

Know Net Worth of Susan Collins

Based on the Financial Disclosure Form filed by the members of Congress, Senator Collins has an estimated net worth of $3.26 Million as of 2014. They are estimated by adding the member's full range of reported assets & then subtracting their liabilities, with estimated net worth being the average net worth. Collins net worth is 19% more than the average Senator & 3.1 times more than the typical congress member. She is fairly wealthier than the average member of the Congress & 4th among all the members from Maine. Senator Susan M. Collins receives $174,000 as the annual salary from the U.S. Government.

Collins defeated Democrat Thomas H. Allen, in the General election, won re-election to the United States Senate on November 4, 2008. Collins was endorsed by Senator Angus King.
Senator Susan M. Collins Campaign Committee has raised over $7.59 million in their 2008 election & spent $7.7 million. During 2014 election, his Campaign Committee collected over $5.3 million & spent over $5.29 million. Recently after defeating Democratic Party member, Shenna Bellows in General Election, Susan got elected as the U.S. Senior Senator on November 4, 2014, ran unopposed in the Republican primary on June 10, 2014. Senator Collins also served as the Deputy State Treasure of Massachusetts in 1993. Susan Collins stands in the center of Republican Party votes, much reliable vote based on multiple outside rankings. In 1992, she served as the New England Regional Director, United States Small Business Administration. From 1987-1992, she served as the Commissioner of the Maine Department of Professional & Financial Regulations. Also served as the Staff Director of the Senate Governmental Affairs Subcommittee on the Oversight of Government Management.

Senior Senator Susan M. Collins was born in Caribou, Maine, the United States in 1952, where she academically attended her high school. She graduated from St. Lawrence University earning a Bachelors of Arts degree in 1975. Before she worked as the staff of now-former Senator William S. Cohen.