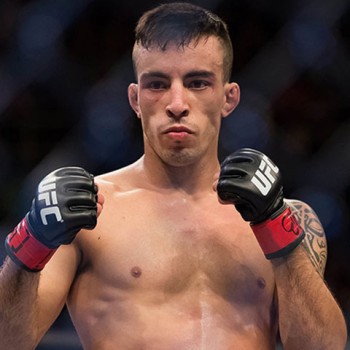 Facts of Thomas Almeida’s net worth

Thomas Guimaraes Almeida, born on July 31, 1991, is a Brazilian mixed martial artist. He has an estimated net worth of $600,000. His estimated career earning/salary is $393,500 (bonuses+ official UFC Rebook sponsorship included). The Terminator currently fights in the Bantamweight division of UFC. He made his professional debut in the year 2011. Besides, he has already proven his excellence in the Legacy FC winning the Legacy FC Bantamweight Championship. He managed by Wade Hampel of Big Fight Management. His current UFC Bantamweight rank is #10. His current MMA record is 21 wins out of 22 matches - 17 by knockout, 4 by submission, and 1 by decision.

Before making his professional MMA debut in September 2011, Almeida earned an undefeated record of 8-0 with 4 wins via  KO in his native country Brazil. Thomas made his Legacy FC debut on November 16, 2012, at Legacy FC 15. He defeated Cody Williams via KO in the very first round. Later, he won against George Pacurariu and Caio Machado. Thomas claimed the Legacy FC Bantamweight Championship by defeating Caio via TKO in the first round.

Joining the organization in the year 2014, Thomas Almeida made his promotional debut against Tim Gorman at UFC Fight Night 56 and won the Fight of the Night bonus award  He won the match via unanimous decision. Later, he gained his second victory against Yves Jabouin on April 25, 2015, at UFC 186. The Terminator finished the match via TKO in the first round. He also gained his second Performance of the Night bonus award with the win. Likewise, he later defeated Brad Pickett, and Anthony Birchak, adding another two Performance of the Night bonus. Almeida faced his first defeat against Cody Garbrandt via knockout on May 26, 2016, at UFC Fight Night 88.  Recently, Thomas he defeated Albert Morales at UFC Fight Night 100.