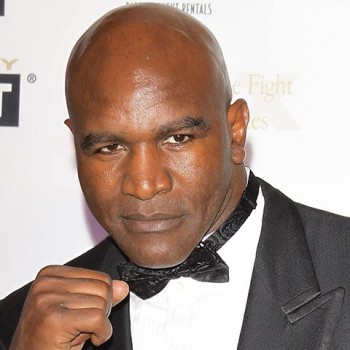 Facts of Evander Holyfield’s net worth

Evander reportedly earned around $513 million in his successful boxing career. Unfortunately, he ultimately lost almost all of his wealth. He was almost bankrupt by the year 2008. He even had to sell his 109 rooms Atlanta mansion famously known as 'Georgia Mansion.' Music mogul Rick Ross purchased the estate a public auction paying $7.5 million. .Besides, he also sold everything from his Olympic bronze medal, 20 pairs of fight gloves, championship rings, belts, 25 match robes, furniture, jewelry to shorts.

One of The Ring's greatest punchers of all time, Evander retired in 2014. As of present, Evander has been actively taking on television opportunities as they come. In 2016, he participated in the Argentine dancing reality show 'Bailando 2016.'

The fighter began to fight from the age of 21 in the year 1983. In the year 1985, he ranked up to the Cruiserweight division. He gained his first world championship victory in 1986 against Dwight Muhammad Qawi. Following the WBA title, he remained undefeated beating  Carlos de Leon and Ricky Parkey. After that, he acquired Lineal, WBC, and IBF titles, winning the ranking of an Undisputed Cruiserweight Champion.

He went big when he fought in the heavyweight division in the year 1988. After winning several matches, he ultimately won against Buster Douglas in 1990 and claimed the undisputed WBA, WBC, IBF, and lineal heavyweight titles. Nevertheless, he has fought against several other reputed fighters including Larry Holmes, Mike Tyson, George Foreman, Michael Dokes and John Ruiz. In 1996, he reclaimed the WBA title defeating Mike Tyson.