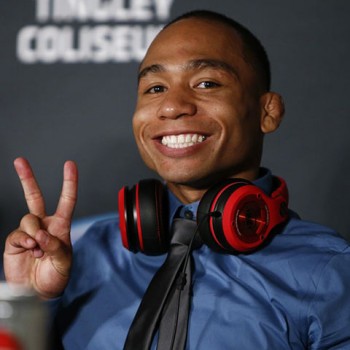 Facts of John Dodson’s net worth

John was an active sportsperson in his high school in Moriarty, New Mexico. Back then, he participated in track, wrestling, and football. in fact, he was a two-time state champion, four-time district champion, and one-time state runner-up in wrestling. After graduating from the high school in 2003, John joined the University of New Mexico. Then, he also worked at a local Chuck E.Cheese's restaurant to support his study. Dodson started his MMA training in 2002 under Chris Luttrell and Greg Jackson. Training under Greg Jackson, he competed in a Grappler’s Quest and won the bout. Four months later, he won an intermediate level submission tournament. And after six months from the tournament win,  he enjoyed his first amateur match. Dodson also enjoyed another amateur match before turning pro. Amazingly, he made his pro debut in Japan against the no 1 ranked flyweight in the world, Yasuhiro Urushitani. Unfortunately, he lost the bout via a controversial decision. Post the match, he began training hard but wasn't getting enough matches at flyweight. Thus, John started fighting featherweight and bantamweight fighters as well. John had a 3-2 record before defeating future WEC fighter, Clint Godfrey. With the win, Dodson grabbed a chance to participate in the Tapout Reality Show. Later, he earned a 1-1 record under the Ultimate Warrior Challenge Promotion. Eventually, he was allowed to take a shot at the vacant UWC flyweight title at UWC7 despite his lack of experience. Once again, he lost the match against Pat Runez in a highly controversial five round decision. Later, he managed to gain a sweet victory against unbeaten Jesse Riggleman via unanimous decision at UWC 8.

Dodson signed with UFC’s The Ultimate Fighter: Team Bisping vs. Team Miller in 2011. He defeated Brandon Merkt via first round TKO and made his way to the Ultimate Fighter house. Later, Team Mayhem selected him, making him the first bantamweight is chosen for the fourth overall team. The Magician moved to semi-finals against Johny Bedford defeating John Albert. Later, he secured his place into the finals by defeating Bedford via KO. The impressive finish not only finished the match in the first minute of the second round but also won him additional $25,000 for the fan-voted “Knockout of the Season”.

John Dodson made his UFC debut on December 3, 2011, at The Ultimate Fighter 14 Finale. He defeated T.J. Dillashaw via first-round TKO. The sweet defeat made him the first Bantamweight winner of The Ultimate Fighter competition. Likewise, he also received the Knockout of the Night award and another additional $40,000. Later, he successfully defeated Darren Uyenoyama, Jussier Formiga, Darrell Montague, John Moraga, Zach Makovsky, and Manvel Gamburyan (won, 2016). Dodson's first defeat in UFC came against UFC Flyweight Champion Demetrious Johnson at UFC on Fox 6 in 2013. Though he had knocked Johnson down twice, he lost the bout via unanimous decision. However, both of the fighters were awarded the Fight of the Night honors. Likewise, the magician failed to perform magic against the champion Demetrious Johnson at UFC 191 in 2015. He again lost against Johnson via unanimous decision. In October 2016, John also lost against John Lineker at UFC 96.

Dodson along with his brother, Eric, was raised by their Filipino mother. Dodson has been dating his girlfriend Chelsea. The pair share one daughter named Delilah Skye.