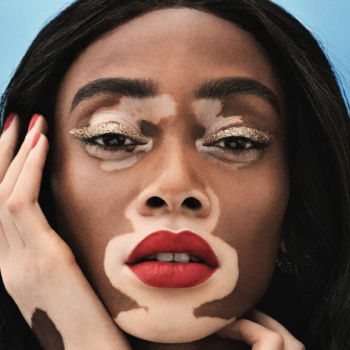 A Canadian fashion model, known by the name, Winnie Harlow has a net worth of around $3 million. She is also a public spokesperson to mention.

Harlow's career of around five years has bought her a fortune of around $3 million. Without a doubt, her main source of income is modeling.

She has not been open about her earning details but Harlow has received several accolades that include Gala Spa Awards for Beauty Idol(2015), Portuguese GQ Men of the Year for Role Model(2015), and Glamour Awards for Editor's Award(2017).

Winnie was discovered by the host of America's Next Top Model, Tyra Banks. In 2014, she became the first and only Canadian cast on ANTM. However, she was eliminated in the second week of the finals.

Harlow made comeback in the show, however, she was again eliminated from the show grabbing the sixth place overall. She soon became the brand representative of a Spanish clothing brand, Desigual.

She also modeled for the Italian clothing brand, Diesel in 2015. Also, she has appeared in several magazines such as i-D, Dazed, Glamour, Complex, Vogue Italia, Ebony, and others.

In 2018, Harlow modeled at the Victoria's Secret Fashion Show also. Adding to her modeling career, Harlow was featured in a commercial for Sprite in 2016.

Harlow has appeared on a music video of several artists such as JMSN's The One, Eminem ft. Sia's Guts Over Fear, Beyonce's Lemonade, and Calvin Harris & Sam Smith's Promises.

About her television appearances, Harlow has appeared in TV shows such as Access Hollywood(2014) Prominent! (2015), and Primetime: What Would You Do(2015).

Winnie Harlow is also a public spokesperson. She mainly talks about her life living with vitiligo. And she has spoken in a TED presentation(2014), Portuguese GQ Men of the Year event(2015), and some more.

What was Winnie Harlow's Early Life Like? Know about it here:

Her original name is Chantelle Brown-Young. She was born on July 27, 1994, in Toronto, Ontario, Canada. She has two sisters also.

Chantelle was born to the parents, Lisa Brown and Windsor Young. At the age of four, Chantelle was diagnosed with the chronic skin condition vitiligo.

What about Winnie Harlow's relationship status? Is she currently single? Let's know:

It looks like this supermodel is not single. The chemistry between Harlow and rapper, Wiz Khalifa is something to know.

Harlow and Wiz Khalifa have been seen together several times. They were also together at the Victoria's Secret Fashion Show in 2018.

She also dated an actor, Nick Cannon in 2015 and an English Formula 1 driver, Lewis Hamilton in 2016.

Is Winnie Harlow active and popular on social media? Let's check her accounts:

She is as her Instagram account shows a total of 5.9M followers and she has posted 3,768 times over there so far.

Similarly, on Twitter, she has gathered around 82K followers and she has tweeted 13.1K times till the date.