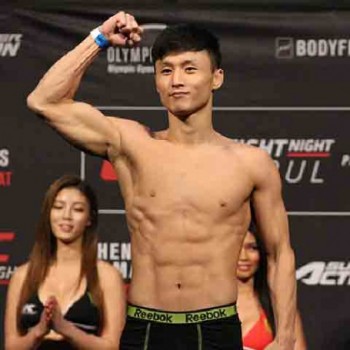 Choi Doo-ho is a South Korean mixed martial artist who is currently competing in the Ultimate Fighting Championship(UFC) in Featherweight Division.He has the estimated net worth of $168,000.Choi is ranked in no. 13 in UFC featherweight rankings.

There has been no any information about Choi's cars, houses, and endorsements.

In 2010, Choi faced Yusuke Kagiyama in his DEEP debut match in Mixed Martial Arts(MMA).He lost his debut match but he was noticed from his first debut match.Then in September 2010, he faced Atsuhiro Tsuboi and won by TKO in the first round.Then he was unbeaten in his several fights beating fighters like Mitsuhiro Ishida, Kosuke Omeda, and Nobuhiro Obiya.In 2015, he faced Shoji Maruyama and won by TKO in the second round.

Choi signed Sengoku Raiden Championship(SRC) while fighting for DEEP.He faced Ikuo Usuda and won the match in his first fight at SRC.After few months, he faced Masanori Kanehara but due to injury Choi couldn't fight and the fight was canceled.

Following a nine-fight winning streak, Choi signed a contract to fight with the UFC in the featherweight division in 2013.Choi faced Juan Puig in his debut match on November 22, 2014, and he won the fight by TKO just 18 seconds into the first round.The fight between Choi and Sam Sicilia was pulled out twice.But in 2015 November 28, the fight took on which was won by Choi via knockout in the first round.He earned Performance of the Night bonus award for the win against Sam Sicilia.

Choi has played a total of 16 fights in MMA in which he has won 14 of them, 11 by knockout, 1 by submission and 2 by decision.He has lost only 2 matches and both of the two losses are due to a decision.

Choi Doo-Ho was born on April 16, 1991, in Gumi, South Korea.Choi had been training MMA, weightlifting, boxing since his childhood days.He was always interested in MMA.He started training when a Jiu-Jitsu opened in 2008 in his city.Choi graduated from Gumi Kyungun University with a degree in Security.He started training after high school to be an MMA fighter.

There is no sufficient information about Choi DooHo, however, he is gaining the attention and soon will be known to all.

Despite that, Choi's favorite grappling technique in MMA is the Triangle and favorite striking technique is Counterpunching.He has been active in MMA since 2009.

Choi admits Chang Seob Lee to be his hero.