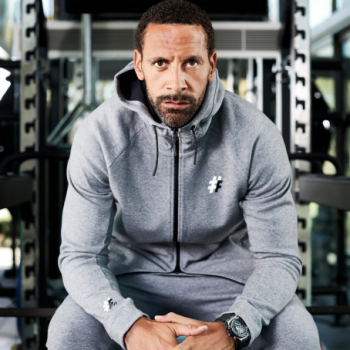 A former English footballer, Rio Ferdinand who played as a center back has a net worth estimated to be around $75 million. He is the current television pundit for BT Sport. He played for England national team for 81 times during the time period of 1997 to 2011.

What are the earnings of Rio Ferdinand? What are his sources of income? Know about his net worth here:

Gaining love and respect from a football career, Rio Ferdinand has collected a fortune of $75 million. Without a question, his main source of income is sports.

Ferdinand owns a beautiful house in Alderley Edge, the United Kingdom valued at around $3.2 million.

He is mainly known as the center back of giant club, Manchester United. Not only from his playing career but Ferdinand has built a net worth of $75 million from several endorsement deals also.

Down here are the figures Ferdinand earned from his career. Have a look:

For which clubs did Rio play at his initials? Know about his career beginnings here:

In 1992, Ferdinand joined the youth team of West Ham United alongside Frank Lampard. Rio stayed a the club until 1995.

Which clubs did Rio link through his senior career? Know about his career highlights here:

After three years at the youth team, Ferdinand was promoted to the senior team of West Ham United at the age of 18 in 1995. For the 1996-97 season, Ferdinand was loaned to Bournemouth FC where he managed to play only 10 games.

He then returned to West Ham where he stayed until 2000. For the club, he scored 2 goals in 127 matches. Then in 2000, he joined the Leeds United. He was with the club for two seasons playing 54 games.

Then, Ferdinand joined Manchester United in 2002. He played a total of 312 matches for the club and scored 7 goals. He remained at the club for 12 years and joined QPR for a season in 2014 after which he retired.

Rio debuted for his national team with England U18 in 1996. He was promoted to the senior team only a year later. He played a total of 81 matches and scored 3 goals for his nation.

After retiring from football, Rio started working as a football pundit. To mention, he along with his friend created a record label, White Chalk Music in 2005.

Where and when was Rio Ferdinand born? Know about his education also here:

Rio Gavin Ferdinand was born on November 7, 1978, in Camberwell, England, to the parents, Julian Ferdinand and Janice Lavender.

Concerning his education, Ferdinand went to Camelot Primary School. He then went to Blackheath Bluecoat School. He was an athletic child attending drama, theatre, and ballet classes.

Is Rio Ferdinand married? Know about his relationship status here:

This 6 feet 2-inch tall center back was married.

Now, Ferdinand is recently engaged to an actress, Kate Wright. The couple is making their wedding plans recently.

But his first marriage was with his long-time girlfriend, Rebecca Ellison in 2009. The couple had their first son in 2006. They had two more children also.

Name and fame are two things that are well deserved by an artist. So has been with Rio Ferdinand.

He has got around 10.5M followers on Twitter and he has tweeted 19.4K times till the date.

Likewise, on Instagram, he has gathered around 3.7M followers and he has posted 1,639 times over there so far.

In addition, Rio owns a YouTube Channel with around 553K subscribers and 123 million video views.